So first off super excited SfB Server 2019 is in public preview !! Annoucement is https://techcommunity.microsoft.com/t5/Skype-for-Business-Blog/Announcing-the-Skype-for-Business-Server-2019-Preview/ba-p/218435

For install walkthrough check out Craig Chiffers post below

I’m focusing on overview, the differences between SfB Server 2015 and SfB Server 2019 and documentation as i find more ill add to this post.

From documentation side it seems Microsoft are using shared documentation between SfB Server 2015 and 2019 where possible and there are several highlights for 2019 but ive spotted a few mistakes and raised them.

So first off theres some changes so Whats New

New features in Skype for Business Server 2019 include the following:

Good bit of info here on UM and supportability here

For these features to be supported in an on-premises Exchange UM deployment, you must be running one of the following:

Call Data connector we can view call monitoring info for On premises and online users in one place which is nice but you need hybrid and for all these new feature you need hybrid so its a step in the path to the cloud with SfBS 2019.

Side-by-Side Migration is nothing new and was a supported method back since OCS to Lync 2010 and was the only method untill SfB Server 2015 which brought us in place upgrades but thats also been removed in SfB Server 2019 below.

Migration to Teams there no details on this in the public preview docs but im sure theres more to come and is aimed at moving SfB Server users to Teams. I didnt find this info on it here

Seems we can move users by PowerShell

and from the GUI 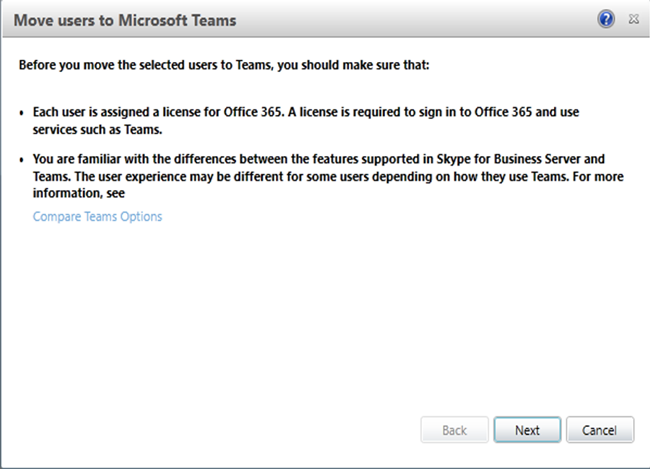 To be honest i wont miss XMPP as in my experience i never deployed it for customer and as google moved away from it there was less use for it, P Chat i thought would be removed as we have Teams but for existing P Chat users there isnt a way to simply migrate from P Chat to Teams. SQL Mirroring was a popular method of SQL HA but Microsoft have said for a long time this will be deprecated from SQL so no real surprise and with no inplace upgrades you will be setting up new SQL anyway so you have SQL AlwaysOn Clustering and Availability Groups for SQL in SfB Server 2019. In Place upgrades were a good thought and did reduce the need to buy new hardware and by side by side migrations i did some of these and there was usually something that needs tweaking so im not sad to see this go. Buy new hardware and start a fresh and dont bring old crap with you lol. UCWA is here and the legacy Mcx service used by legacy clients wont be used so legacy clients cant connect to SfB Server 2019.

More details on each here

You need to have Hybrid to take advantages of the new bells and whistles in SfB Server 2019 and also will ease migrations to SfBO or Teams.

and we have info on migration for

Standard Edition is still here ! and brought back by demand of the community !

Enterprise Edition – you can have one or more (ideally at least three) so the recommendation on three is still valid in a fashion i would think due to windows fabric and the power of three FE’s enables more features like lazy rewrites to SQL and you take advantage of Windows Fabric.

Here it mentions “We do not recommend deploying a Front End pool that contains only two Front End Servers.” “If you want to deploy just one or two servers running Skype for Business Server, we recommend you deploy them as Standard Edition servers.” so for HA guidance is still at least 3 FE’s it seems.

SBAs and SBS’s – are here and SBS are mentioned running SfB Server only so not sure if Lync Server is supported but i think perhaps not. not sure on this.

Back End Databases for SfB Server 2019

SQL Clustering and SQL Always On still supported but Mirroring is gone!

Forest and Domain functional level must be at least 2012

AD Topologies look the same as SfB Server 2015 i think

Supported topologies in Skype for Business Server 2019 are:

No mention of Lync Phone Edition or LRS but i imagine TLS 1.0 is disabled.

Microsoft’s preferred client is SfB 2019 as part of Office 2019 which is Click to Run only! there will no MSI version

Check this out below

Funny i think under Legacy clients it mentions Lync 2013 is supported. hmmm confusing.

Same as SfB Server 2015 with Enterprise Edition and Server Pooling. Front End Pools for HA are still recommended it seem to have at least three FE’s. anything smaller recommendation is to deploy Standard Edition.

When you plan which pools to pair, you must keep in mind that only the following pairings are supported:

Its believed in the Community that the CMS failover bug with standard edition is resolved in SfB Server 2019 as well !

For these features to be supported in an on-premises Exchange UM deployment, you must be running one of the following:

Seems to be the same as SfB Server 2015 although an Enterprise Edition Front End needs double the memory and now 64Gb of RAM.