Few notes from the Skype meeting broadcast from Microsoft on Regionally hosted meetings.

This is big for Office 365 and Skype meetings in Skype for Business Online as currently as all Skype for Business Online users are homed in one location where your office 365 tenant is. For example if you tenant if located in Europe and you have some users in APAC, when the APAC users schedule meetings these meetings are hosted on servers in Europe which is not optimal for media and is subject to network delays, packet loss and jitter and can result in reduced call quality.

Coming soon administrators will have the choice where users are located so users and meetings can be hosted regionally by assigning their users to different Office 365 datacentres. I think this is a great step forward especially for multi national businesses. Customers will still have a single tenant but will multi region support and flexibility to move users. There are a few points to note when moving users noted and below and also customers need to ensure their network is configured optimally to route traffic to the data centre in their region.

Data centre locations are shown below. 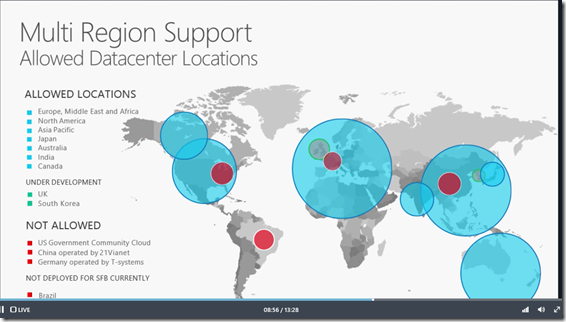 “Clearly the place where we see greatest impact”

Its still a Single tenant but with multiple data centre support and users can be moved between data centre. “Closer is better” was the phase.

meetings get better with regionally support

Contoso HQ is in LA but they have an Office in Sydney, Sydney users log into North America datacentre and have all their meetings hosted in NA.

Also noted in the diagrams is a second option some customers arae doing today and routing Sydney users internet break out across their WAN and then onto the NA datacentre. With regional DC support this architecture will not be optimal and will require changes to ensure traffic is routed regionally to the closest datacentre.

Cloud previously has one place for everything, now you can have your users in Australia data centre.

Below the Office 365 Datacentre is added for the customers tenant.

The admin moves users to Australia datacentre and the customer needs to ensure local internet breakout as shown below, this is key! So network architecture is key as well to ensure optimal routing to the local data centre.

This is the scenario that customer do not want as it wont be optimal as Sydney users are routing over the WAN to LA then back to Australia O365 datacentre.

Ensuring the network routing is optimal is key and the Skype operation framework will help with planning.

Organiser in Sydney, meeting hosted in Australia, for LA users they can connect in NA data centre and connect the media inside Microsoft network to Australia.

So custpmers route traffic to the local data centre and Microsoft will route all the media within their network between datacentres. This was noted to come next year.

Getting traffic locally in the cloud and route inside of Microsoft cloud to optimise meetings. This is great !

Microsoft will take on the bandwidth for you using their cloud. How do we get great regional access is key for customer to consider.

How do customers move forward today ?

This is preview now, sign in at https://www.skypepreview.com/ under NDA section

Out of preview end of this calendar year.

Limited availability to start with

Premier customers must call Microsoft support at end of the year,customer works with Microsoft to enable tenant to mutli region as listed as step 1 below. 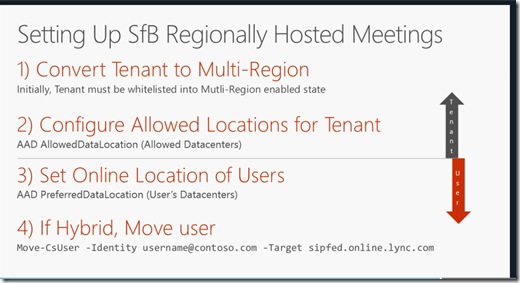 The customer must complete item 2

Hybrid – running SfB server and online you can move users with item 4.

What happens to existing meetings when moving users ?

How are meeting urls affected when moving? They require updating, today you use meeSfB ting migration tool as an end user to update previously scheduled meetings for example when adding pstn conferencing to your tenant or moving data centres /sip domain. Ive done a blog post on this tool here

SfB admins don’t love this as end user uses this tool, with the cloud if your exchange mailbox is in Exchange Online Microsoft can do this for you with their new Meeting migration SERVICE !

No longer a tool for end users, its a process on the back end ! “The Power of the cloud”

Exchange Online as mailbox provider only.

With Exchange Server on premises you have to still use the meeting migration tool. Another reason to move exchange to the cloud. 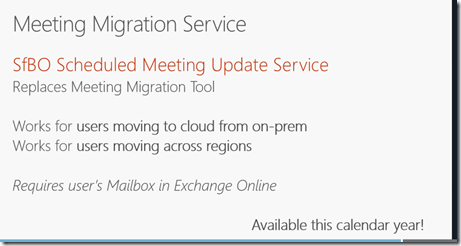 ~This was branded the Meeting Migration Service Not tool !!! 🙂

Customers don’t have to be a regionally hosted meeting enable on tenant. Exchange must be on the cloud so meetings can be updated automatically in the back end.

One note If moving large numbers of users then new meeting invites will be sent out so admin must communicate this otherwises users may come in the next days and find a lot of meetings invites and wonder whats going on.

ACP are third parties audio conferencing providers such as intercall, BT, PGi. ACP is not the Microsoft PSTN conferencing option.

Second point for ACP tenants admins need to make informed choices when moving users as ACP providers may not be data centre locations where you can move users. If you move the users then ACP may break.

Tell me about Cloud PBX and On premises PSTN connectivity for regional hosted meetings users?

When released broad range of testing will be completed for CCE users. CCE users will have to wait till spring to use this. CCE will be available after extensive testing is completed.

Next meeting broadcast from Microsoft is on the new Mac client !