Last Friday Feb 10th 2017 there was a Skype meeting broadcast from Microsoft on VMware and VDI.

Below is summary and run through of the broadcast. May be useful if you don’t get change to watch the recording above. 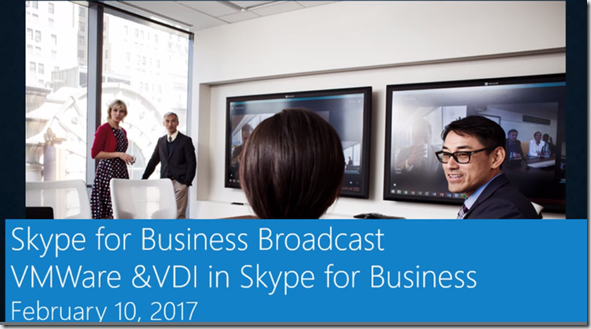 Microsoft a valued partner and VMware see the adoption of SfB growing and growing !

Broadcast shows preview feature via federation between VMware and Microsoft

SfB very important to VMware, VMware use SfB daily to communicate and collaborate so critical to their business.

Options to deliver SfB via VDI

VMware partnership with Microsoft goes back to 2012 / 2013 VMware seeing big adoption of Lync 2013 at this time. VMware worked with Microsoft in 2013 with Horizon view desktop and the Lync VDI client.

With Real time audio and video, a lot of customer use this to try and support audio and video in Linux or mac clients. Not supported and has media hair pinning, no benefit of the Lync VDI plugin. Customer still wanted to do this regardless. SfB was critical to customers and they would do it any way they could knowing the risks.

Last year VMware announced partnership for SfB as of Q1 2017 the VMware virtualization pack will be available. It will support Lync Serer 2013, SfB Server 2015 and support for SfB Online / Office 365. Future Plans for Office 365.

The Tech preview will be Lync / SfB Server and SfB 2015 client only at this time.

~Shown at VMware Barcelona last year and was part of keynote

VMWARE seeing huge interest of when this will be available. 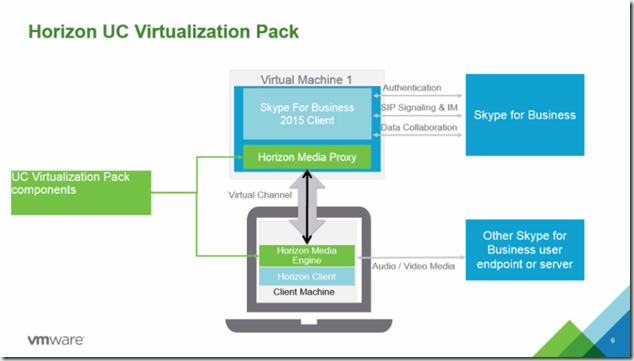 You have client endpoint (Machine) which connects to Virtual Machine (Desktop)

User uses horizon client to connect to virtual desktop, they launch SfB client, over the virtual channels, the media engine will pair with media proxy and session will run in optimised mode.

You use SfB client and have an AV call, the minute it start the media engine takes over and processes all the audio and video, installed on the client endpoint so this is where the media processing takes place not on the infrastructure. RP Media processing is offloaded.

Media also goes direct P2P (endpoint to endpoint) and NOT on the back end server infrastructure.

With VMware on-board this gives Microsoft more coverage and supportability in scenarios for SfB. Organizations have more options. All major platforms will have more support moving forward.

Some features require the media engine and some don’t, the below show which are required.

If you don’t use Audio or Video you don’t need the media engine deployed. 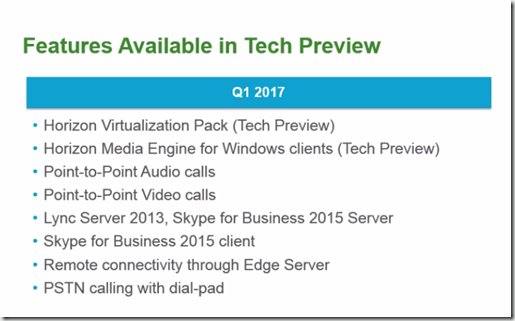 VMware requirement is 7.1 and new Horizon client believed to be 4.4  client.

Made available as separate downloads

Question and Answers in broadcast from audience

Will be the new VMware V Pack make the Lync VDI not required ?

Its an evolution of Lync 2013 VDI plugin but customer want to use Office 365 in the future or Linux or mac clients. These weren’t supported before.

Lync 2013 VDI can still be used for supported environment.

Windows thin or Linux thin, media engine supported on both.

a lot of options for customers

Yes, it will as the RTP Media stream is separate

Will plugin support both PCOIP and RDP ?

Both 32 and 64 bit of media engine will be available

VMware not tested having both, from storage perspective you may only want to have one installed at client endpoint.

Will RDSH or published app ?

Only will work in virtual desktop

At what level of licencing is required ?

Announced later, no charge for software bit. VMware will announce what additions this will be available in.

Microsoft requires full version of the client (NOT basic),

Gallery view is not currently supported, VMware looking to support if its possible.

Support for USB tethering ? Such as Polycom CX600 ?

Not currently, looking into at a later timeframe

Does the plug for MMR work ?

USB headset and USB enable in Horizon view is it supported ?

No announcement for future broadcast so check Twitter. Should be 2 week from today.

Hope this summary was useful.