So far i must say im loving the Skype for Business Preview heres a few of the new things to come. The preview client is an update to the Lync 2013 client which is still using the Lync 2013 Server backend so not all the new features are visible yet such as Skype directory in the client and call via work but there’s loads of good stuff now. 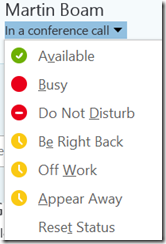 New out of office icon

took me a while to get this one.

Flatter menus and fewer options no hovering like Lync 2013

Whiteboarding and polling and Q and A are found under more….

Always on top over opened apps with hangup and mute.

No more racing to find the mute and hang up button.

Hover for call controls with video

can be turned off

Always one i hear about with Lync 2013 from users is slow transfers.

Have Message count and message preview which is nice to have